Two Iconic Jumpers Worn by Princess Diana Are Back

The Princess of Wales’ “black sheep” and “I’m A Luxury” jumpers made headlines in the ‘80s. Now they’re back, thanks to collaborations between their original British designers and NYC brand Rowing Blazers

A young Lady Diana Spencer, newly engaged to the Prince of Wales, made headlines when she wore a now-iconic red jumper to watch her fiancé play polo in 1980. Emblazoned with rows of white sheep – and one black sheep – it was interpreted by some in the press to mean that the Princess-to-be may have felt like something of an outsider in the Royal family.

The “sheep sweater” – which Diana wore on several other prominent occasions during her marriage – was actually designed in 1979 by two twenty-something Londoners, Joanna Osborne and Sally Muir, and produced by their cheerfully-named brand, Warm & Wonderful. Selling their knits from a market stall in Covent Garden, they counted not only the Princess of Wales, but also David Bowie, Andy Warhol, and a collection of other ‘80s icons among their customers.

Osborne and Muir – now fine artists whose work has appeared in the Royal Academy – haven’t produced the design or used the “Warm & Wonderful” name since 1994… until now. This, and another iconic knit famously worn by the late Princess, are back, produced as exclusive collaborations with Rowing Blazers, an irreverent, vintage-inspired New York brand worn by the likes of Timothee Chalamet and NBA star Russell Westbrook.
“As artists, we’ve always identified with black sheep ourselves: because of a recessive gene, black sheep are born with black wool in flocks of otherwise white sheep (in a flock of a hundred, there might only be one black sheep!),” wrote Osborne and Muir. “Since Diana’s first public appearance in one of our bright red sheep jumpers — at a polo match in 1980 — she and the design have been inextricably linked. As Princess of Wales, she wore the sweater on several other occasions, eliciting a great deal of press commentary and making the design incredibly popular, not only here in the U.K., but around the world. Throughout the ’80s, our sheep sweaters were carried at department stores from New York to Tokyo.”

The sweater’s popularity also, of course, led to many knock-offs. While the design has been copied many times over the years, Osborne and Muir’s “Warm & Wonderful” jumper is the first and most famous: The Victoria & Albert Museum even has one in its permanent collection.

Another iconic Diana knit – a soft pink and white sweater with the cryptic phrase “I’m A Luxury” blocked out across the front – also forms part of Rowing Blazers’ FW20 collection, again produced in collaboration with the jumper’s original designers: Gyles Brandreth, a British writer, entertainer, and sometime Member of Parliament, and George Hostler, an artist and sculptor turned knitwear designer. Known for their sense of humor, the pair made sweaters for the Princess of Wales, Elton John, and for Gyles himself – whose own television career became closely intertwined with their colorful jumpers.

Gyles says, “When I was appearing regularly on TV-am, Countdown, and game shows like Give Us A Clue, George and I created new jumper designs for me to wear for each appearance. This was all before the age of the internet – let alone the fax. Because he was based in Leicester and I was in London, I’d call him to discuss an idea, or send a doodle of a design to him on a postcard; he’d then create the jumper, parcel it up and send it up to London by train. I’d be at the parcels office at St Pancras station several days a week picking up packages from George.”

Of the collaborations, Rowing Blazers creative director Jack Carlson says: “Both of these sweater designs have been copied or referenced by others over the years (sometimes without crediting or acknowledging the original designers). But collaborating with the original designers is exactly what makes this so special to me. I can just picture Joanna and Sally in their twenties, selling their jumpers to Sloane Rangers, pop stars, and royalty. I think there’s a lot of nostalgia in the air right now, and a great renewed interest in Diana’s style in particular. When I was little, in the early ’90s, my family lived in Hampstead in north London, and my mother had one of the original Warm & Wonderful sheep sweaters. It looks as great now as it did then. And I’ve collected vintage Gyles & George jumpers online for years – but an authentic ‘I’m A Luxury’ sweater is nearly impossible to find. The timing couldn’t be better for Rowing Blazers to bring these iconic designs out of the archives with the brands and designers who originally created them.” 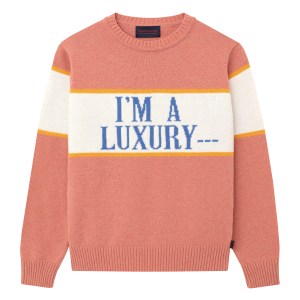 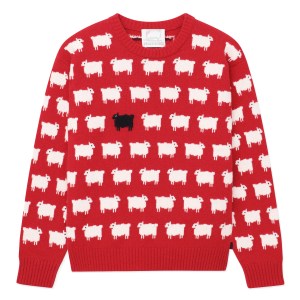