Following the viral success of Rudy’s Vegan Butcher, the UK’s first permanent vegan butcher which opened its doors in Islington last year, the team behind the cult plant-based brand are bringing their signature cruelty-free cuts to central London, with a new counter at Selfridges.

On a meat-free mission to provide unbeatable products to vegans and non-vegans alike, the brand-new butcher is now open seven days a week in Selfridges Foodhall. With both a butcher’s counter and a deli menu available, the slab is stocked with plant-based products, mind-blowing mock meats and vegan home cooking staples alongside a range of to-go hot and cold American diner favourites.

New products for Selfridges include charcuterie favourites such as meat-free Mortadella and Merguez, alongside cold cuts such as spiced pastrami and peppered salami, weighed and sliced at the counter. Whip-up a full English brekkie at home with baycon and black puddin’, while a selection of dirty burgers, soysage patties and rack of jack ‘ribs’ have you covered for a perfect summer spread for al fresco BBQs and gatherings.

Rudy’s at Selfridges will also be serving up a delicious deli menu, comprising signature American diner dishes with a vegan twist so shoppers can enjoy Rudy’s on-the-go, with dishes from £5.50. Signature dishes will include the unbelievable, oozing Mac & Cheeze and the legendary Rudy’s Ruben’z, a spectacular sandwich stacked high with plant-based pastrami, pickles, crispy onions and Russian dressing. Of course, they’ll also be keeping the menu fresh with never-seen-before items exclusive to Selfridges such as the Veatball sub and a seasonally changing plant-based pie of the day.

Rudy’s Vegan Butcher launch at Selfridges falls in line with Project Earth, the retailer’s on-going sustainability initiative which aims to increase its range of plant based options, as well as committing to providing a 100% organic meat offer across all of Selfridges Foodhalls and restaurants by 2025.

Rudy’s Vegan Diner launched in 2018 in Camden Market as London’s first all-vegan diner, serving veganised versions of classic American junk food, pioneering a new style of vegan food and showing Londoners that vegan food can be dirty and delicious. After two successful years, Rudy’s launched DIY restaurant kits for nationwide delivery to allow customers to recreate their four most popular dishes at home. Going from strength to strength, the brand launched the UK’s first permanent vegan butcher on Islington’s Upper Street in November 2020 to much acclaim, selling a range of plant-based products in store and expanding their online shop with a wide range of mock-meats such as baycon, pastrami, burger patties and meatballs, all created from scratch. Rudy’s Vegan has developed a loyal following and looking to spread their sustainable, meat-free message across the UK. 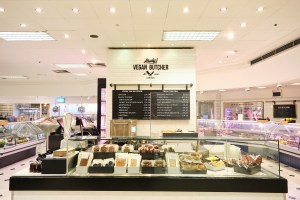