This new art installation, co-commissioned with Ikon, Birmingham, entitled Infinity Pattern 1, is dramatically changing the Birmingham skyline as it stretches over 10,000 sq. meters (nearly 50 meters in height and 250 metres in length and weighing 5 tons).

A radical new landmark for the city, Infinity Pattern 1 addresses the issues of race, labour and migration, which have shaped Birmingham’s past and present, but also carries a deep sense of optimism, connectivity and hope. For Osman, who is Birmingham-born, and the son of Pakistani-Afghan migrants, the work contains some autobiographical elements, but at its core it stages the concept of a world without borders, whether physical or imaginary, represented by the endlessly tessellating pattern. This major public artwork – part of Selfridges long-established commitment to supporting creativity in the cities its stores call home – will remain in its completed state until the end of the year. It will be dismantled progressively next year whilst major renovation work to the store, started last winter, come to an end just ahead of the Commonwealth Games. Osman’s installation was chosen following an international competition led by Ikon, Birmingham, the highly esteemed art gallery.

The commission is complemented by an in-store art exhibition, shop and art trail (also opening on 26th July) all co-designed and co-curated with Ikon, as part of an ongoing creative relationship between the gallery and the store. The art exhibition and trail will expand the conversation around some of the topics raised by Infinity Pattern 1, through further new works by Osman, as well as pieces by Birmingham artists Hira Butt, Farwa Moledina and Maryam Wahid, to discover within Selfridges Birmingham store.

Osman’s additional output was developed through a recent residency at Birmingham’s School of Art in Fine Art Printmaking and Sculpture. The new pieces are anchored by a series of mixed-media works on paper, challenge  the stereotypes of ‘The Model Migrant’ and the perception of the role of Brown Bodies in the Western world.

The exhibition shop showcases an exclusive collection including tote bags, blankets and vegan leather accessories all featuring the distinctive Infinity Pattern 1 design, alongside a curated selection of products celebrating the city of Birmingham.

Osman Yousefzada said: “The work is entrenched in autoethnographic elements of migration, community formation and how they happen, interact and settle. The work reflects my personal story and more widely my ethnic history and some of the symbolisms inherent to my culture.”

Selfridges Creative Director, Hannah Emslie said: “Selfridges is celebrating the communities of Birmingham through a unique art commission that represents both optimism and transformation. This new work by Osman Yousefzada is uplifting but also meaningful and deeply connected to the fabric and culture of the city. By changing the skyline – at a time when the city itself is changing – we hope to make the world brighter through creative expression, and the people of Birmingham even prouder of their iconic city.”

Jonathan Watkins, Ikon Director said: “After leading the search for an artist to work with Selfridges it’s exciting to see the transformation of Birmingham’s skyline thanks to Osman Yousefzada’s “Infinity Pattern” enveloping this iconic building with extraordinary visual impact. The work smartly conveys his ongoing preoccupation with the nature of cultural identity, a basic human need for belonging and the experience of migration, and these themes will be developed further through an exciting programme of events taking place instore as part of Ikon’s Migrant Festival in August. It couldn’t be more right for this city.”

The concept of Infinity Pattern 1 sprung from ‘Her Dreams Are Bigger’, a film Osman made in 2019, in which Bangladeshi garment makers imagine the lives of the women wearing the clothes they make. In the film, one of the garment makers says: “Everyone holds dreams they can afford (…) I have very little money, so my dreams are small”.

Osman Yousefzada said: “The structural infinity built within the design of this installation is a direct and contrasting response to the garment factory worker’s statement of the limitation within their life’s horizon. Instead I’m proposing this antidote that conjures up an endless connectivity, new possibilities, countless new journeys.”

Osman Yousefzada is London-based, Birmingham-born multidisciplinary artist, whose practice has expanded since launching his eponymous label in 2008 revolving around modes of storytelling, merging autobiography with fiction and ritual. His work is concerned with the representation and rupture of the migrational experience and makes reference to socio-political issues of today. These themes are explored through moving image, installations, text works, sculpture, and garment making along with performance.

Ikon is an internationally acclaimed art gallery situated in central Birmingham. Housed in a magnificent Victorian school building, it is an educational charity and works to encourage public engagement with contemporary art through exhibiting new work in a context of debate and participation. It offers free entry to all. Ikon was commissioned by Selfridges to launch an international competition to find the artist who would design the artwork to cover the Birmingham store. Ikon also presented Osman’s first solo exhibition, Being Somewhere Else, in 2018.

Selfridges has had a long-standing commitment to supporting the arts since its first store opened in 1909 to the most creative window scheme London had ever seen – an homage to works by French painters Fragonard and Watteau. In the past 15 years alone, Selfridges has given its patronage to an ever-increasing number of initiatives focusing on emerging artists in particular; and supporting and engaging with the creative communities in the cities its stores call home in London, Birmingham and Manchester. Selfridges has on-going relationships with IKON, The Yorkshire Sculpture Park, Frieze, The Whitworth, Manchester International Festival and Bold Tendencies. It has commissioned site-specific work to or has exhibited work by artists as diverse as Yayoi Kusama, Fernando Botero, Tracey Emin, Marc Quinn, Sam Taylor Wood, Spencer Tunick, Banksy, Brian Eno, Conrad Shawcross, David LaChapelle and Joana Vasconcelos, Matthew Darbyshire, Yinka Ilori, Jonathan Scofield among many others.

Selfridges in Birmingham’s Bullring is undergoing major renovation work expected to last until summer 2022 whilst the store remains open throughout and trade as normal. The renovation work is being carried out by Hammerson, who owns and manages Bullring & Grand Central and will see the 15,000 silver disks removed and stored, while the building’s facade is replaced alongside installing a new layer of insulation. Once this has taken place, the building will be re-painted in the original eye-catching Yves Klein Blue before the disks are re-attached. The building’s design was created by architects Future Systems and was ground-breaking. Since its original construction, there have been major advances both in construction and building standards as well as insulation. The renovation works and insulation upgrade will deliver a 50% improvement in U-Values (the rate of transfer of heat through a building), making the building more energy efficient to run whilst improving its carbon footprint. This is consistent with Hammerson’s Net Positive strategy. 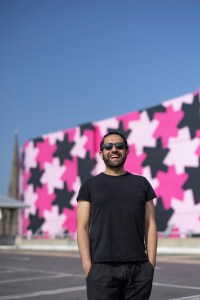 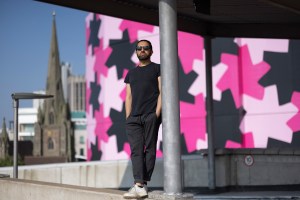 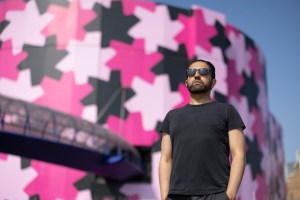 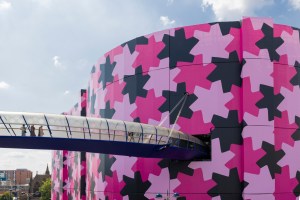 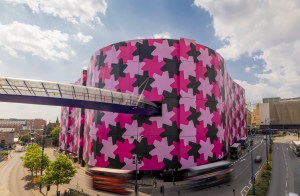 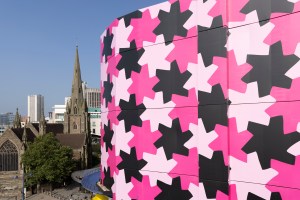