“Culture and creativity are at the heart of Selfridges’ DNA. It’s what helps drive us forward and infuses everything we do. The importance of culture and the richness it brings to our lives has never been so vital. With this in mind, we’re delighted to launch Super Culture – a new programme of events, films, installations and experiences, celebrating the most exciting ideas in the arts, both online and in store.” says Hannah Emslie, Selfridges Creative Director of the London store’s new initiative.

Selfridges is committed to supporting creativity in the cities its stores call home. This year it has collaborated with American sound artist Christine Sun Kin on her Captioning the City installation, as part of Manchester International Festival, and partnered with Birmingham’s IKON gallery and multi-disciplinary artist Osman Yousefzada, on the world’s largest work on canvas, Infinity Pattern 1.

Super Culture continues Selfridges’ ambitious autumn 2021 arts programme, led by series of cultural experiences at its London store and at Selfridges.com/superculture. The Super Culture Loading Bay Series, curated by Bold Tendencies and dancemaker and performer Sharon Eyal will happen in an unexpected store location never seen by the public before. The Art Block, curated The Yorkshire Sculpture Park with curator Helen Pheby, will present new work by artist William Darrell. There will also be a new podcast series on culture. Throughout Super Culture, Selfridges physical and digital spaces will explore joy and positivity through creativity, in collaboration with over 40 artists and performers.

“Alice, go closer to the people,” urged Eyal. “Be a bit more extreme. Look into their eyes.”

For the first time ever, Selfridges’ loading bay – the beating heart of the store on the lower ground floor – will be open to the public for a unique cultural event curated by Bold Tendencies and Sharon Eyal, one of the most radical choreographers working today. The critically acclaimed award-winning Sharon Eyal will be presenting a breath-taking six-part performance series across 3 consecutive evenings. The programme will celebrate the breadth and scale of Sharon’s work to date – bringing together the combined forces of her dance company the L-E-V Company, the dancers of tanzmainz and the Rambert2 ensemble. The six magnetic, uncompromising pieces, all masterworks in groupology, stamina and exactness, have been reconsidered specially for the vast subterranean space of the loading bay, as if shown for the first time. One piece, the energetic Soul Chain conceived for 17 dancers will be performed for the first time in the UK.

The Art Block is Selfridges permanent destination dedicated to the exhibition of contemporary sculpture. Designed by in collaboration with David Chipperfield as part of the transformation of the Accessories Hall on Duke Street, the Art Block was launched in 2018 in collaboration with Yorkshire Sculpture Park, the leading international centre for modern and contemporary sculpture and co-curated by the centre’s Head of Curatorial programme, Helen Pheby. The latest – and fifth – artist to exhibit on the Art Block is William Darrell, whose practice is informed by biology, evolution and the laws of physics. The new work is a special commission for Selfridges, a mind-bending kinetic piece, crafted from recycled plastic. Entitled ‘Restless Bulbs and Rotting Goodness’, the new work is a botanical metaphor, comparing perennial plant life in its dormant state with the lockdown experience. The colourful and kinetic flower-like sculptures mounted on real soil, are symbolic of humans resurfacing from lockdown, impacted by the experience yet springing back to life.

The windows on Duke Street.

Using its world-famous windows as a showcase for the arts – beyond window dressing – has been a consistent pattern at Selfridges and, for Super Culture, three exciting artists have been commissioned to create site specific artworks inspired by community, pleasure and new realities.

With the creative industries undergoing the most challenging time in their history, Selfridges wanted to pay homage to their resilience and toast to new beginnings through a new podcast series. Over six episodes, the new series, co-produced by Selfridges’ award-winning broadcast platform Hot Air, and hosted by writer and broadcaster Natty Kasambala, will feature remarkable people from a range of disciplines who are inspiring change, joy and positivity in their artistic fields.

For Super Culture, Selfridges as created an ode to each of the cities the store calls  home – London, Birmingham and Manchester – through a series of films that honours their unique cultural identity and celebrates Selfridges’ 2021 arts programme – its first full programme since 2019.

•  The London film features some of Selfridges’ past and present artistic collaborators, including the current in-store Art Block exhibitor William Darrell, and Bold Tendencies founder and gallerist Hannah Barry.

•  The Manchester film captures the city’s magnetic energy and celebrate its musical ties through a beautiful poem, specially commissioned by Selfridges, by the Manchester-based poet and rising star P.A. Bitez.

•  The Birmingham film centres on artist Osman Yousefzada who recites his moving love letter to his birth city, as the film reveal his ‘Infinity Pattern 1’ installation that currently envelops the Selfridges Birmingham store until next spring.

Selfridges has had a long-standing commitment to supporting the arts since its first store opened in 1909 to the most creative window scheme London had ever seen – an homage to works by French painters Fragonard and Watteau. In the past 15 years alone, Selfridges has given its patronage to an ever-increasing number of initiatives focusing on emerging artists in particular; and supporting and engaging with the creative communities in the cities its stores call home in London, Birmingham and Manchester. Selfridges has on-going relationships with IKON, The Yorkshire Sculpture Park, Frieze, The Whitworth, Manchester International Festival and Bold Tendencies. It has commissioned site-specific work to or has exhibited work by artists as diverse as Yayoi Kusama, Fernando Botero, Tracey Emin, Marc Quinn, Sam Taylor Wood, Spencer Tunick, Banksy, Brian Eno, Conrad Shawcross, David LaChapelle and Joana Vasconcelos, Matthew Darbyshire, Yinka Ilori, Jonathan Scofield, Osman Yousefzada among many others.

Bold Tendencies is a not-for-profit organisation started in 2007 in Peckham, London. It supports artists to develop their ideas and to realise site-specific projects, and present live performances from its rooftop home, Peckham’s Multi-Storey Car Park, as well as producing special projects off-site. Bold Tendencies celebrates the free enjoyment of public space in the city, welcoming participation in its rich, experimental programme and open access to a special, spectacular place. boldtendencies.com

Sharon Eyal is one of the most radical choreographers working today. As well as creating a repertoire of critically acclaimed original works for dance companies around the world, she has made notable projects outside the dance world, working with American rock band The National, Maria Grazia Chiuri at Dior and electronic musician and producer Koreless. Sharon Eyal’s work is in demand worldwide and her unmistakable style is iconic. Known for propulsive performances that fuse classical dance with underground club culture, she seizes darkness with intention. Punctuating her sharp and brutal choreography with vulnerability and emotional depth, Eyal harnesses the human body to assume a grave

beauty, capturing the raw condition of human expression — the brutal journey of the heart.

L-E-V is the dance company founded by Sharon Eyal and Gai Behar six years ago. Juxtaposing technical precision with rapturous, unapologetic freedom, their work gives form to the inalienable battle between our deepest feelings. L-E-V is the confluence of movement, music, lighting, fashion and technology,

with performances as much at home in a nightclub as at the opera house. Their work forces the world to challenge itself and its boundaries, giving voice to the power of ferocity, determination and hope. Sharoneyaldance.com

The Art Block is a marble and steel monolith designed by David Chipperfield as part of his commission to create Selfridges’ Accessories Hall, the world’s largest destination for luxury handbags and accessories. The Art Block – situated right in the middle of the Accessories Hall, has been designed to showcase large pieces of contemporary art that can weigh up to 3.5 tonnes and measure well over 4 metres in height, thanks to the very high ceilings within the space. The Art Block presents two new residencies every year (of six months each), curated by Helen Pheby of YSP. 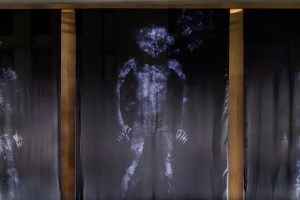 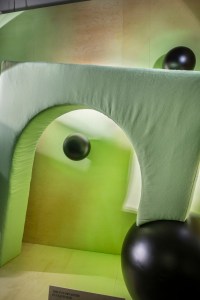 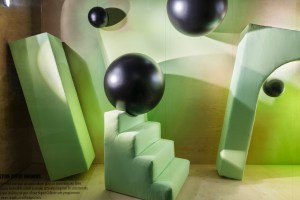 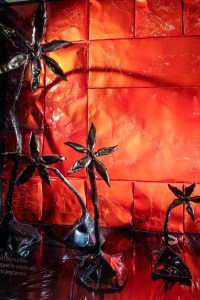 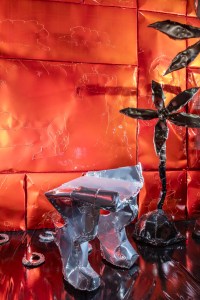 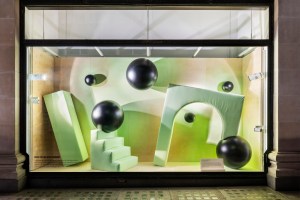 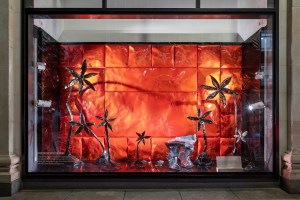 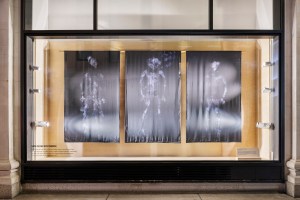 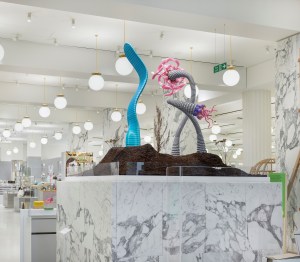 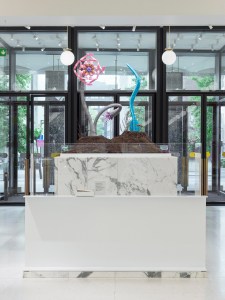 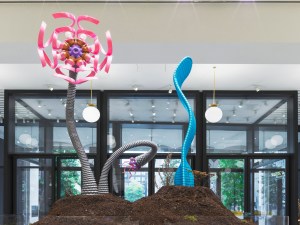 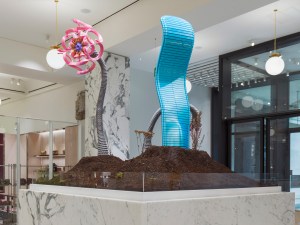 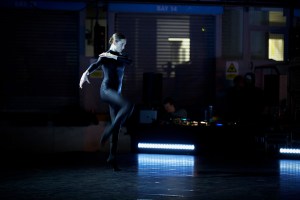 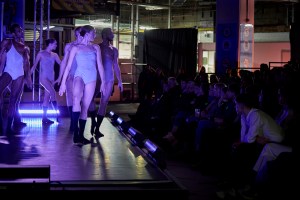 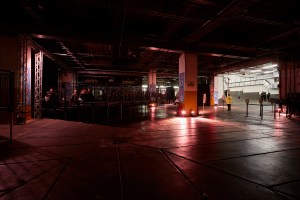 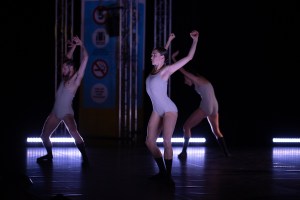 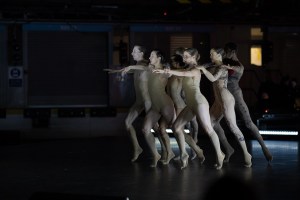 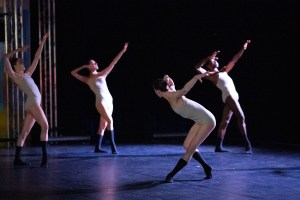 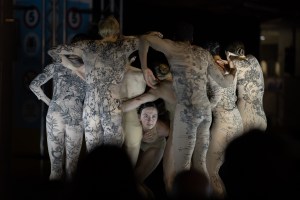 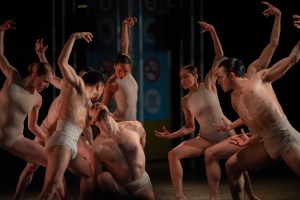 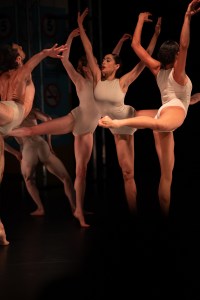 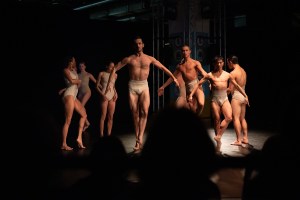 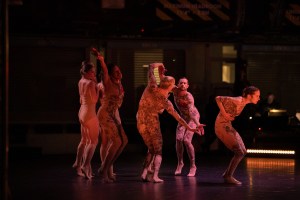 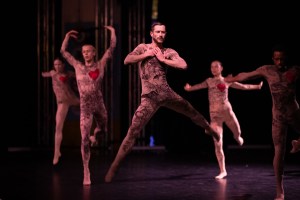 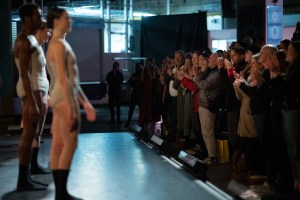 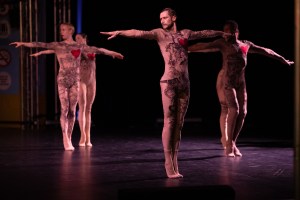 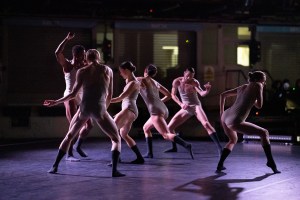 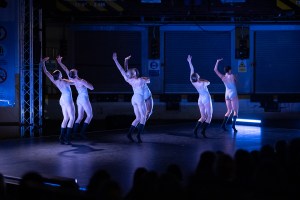 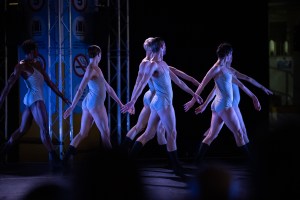