This summer, Selfridges has partnered with Berlin’s Reference Festival to present SUPERFUTURES, an immersive exhibition bringing together 13 experiential spectacles and surreal interventions by leading artists, brands and thinkers. Installed throughout Selfridges London, the exhibition will also be available to view digitally.

The SUPERFUTURES Exhibition seeks to explore and imagine tomorrow’s world – how might we live, what might we look like, how will we behave, and what might it feel like? The exhibition presents a vision of a hybrid future, serving as a generative portal between the world-as-is and world-yet-to-come. Staged within Selfridges’ retail environment – a familiar and safe space for many – the installations have been designed to disrupt, provoke and inspire, gently probing customers to consider, ‘if we continue the way we live today, where might this trajectory take us in the future?’ 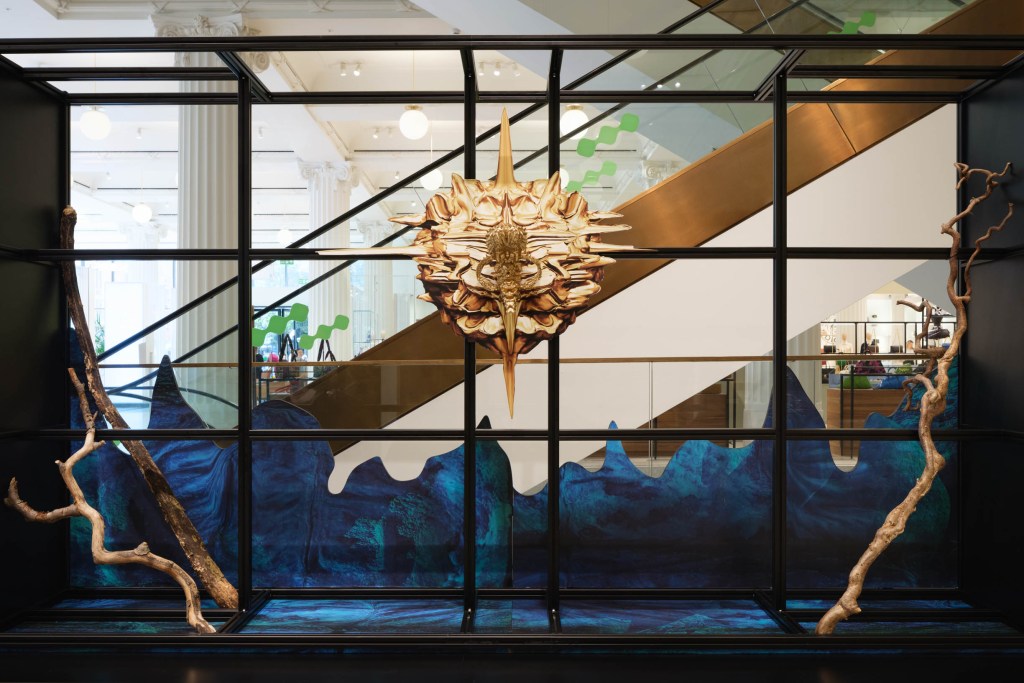 Highlights include an installation of sculptures by Estonian artist Katja Novitskova, examining the relationship between technology, biology and ecology; Jakob Kudsk Steensen’s video work Liminal Lands, in which the Danish artist proposes a future where data and biology fluidly interconnect; and a specially commissioned display of five inflatable sculptures, which is paired with a selection of oil-drill-shaped Murano glass sculptures, by Monira Al Qadiri, a Kuwaiti visual artist born in Senegal and educated in Japan. 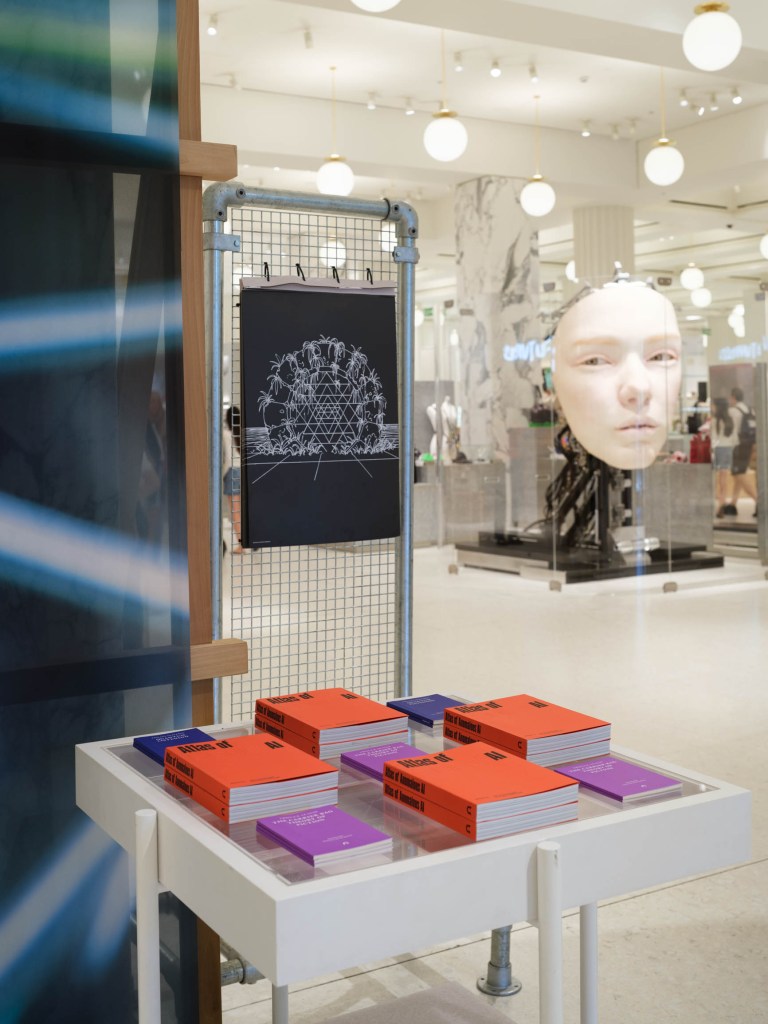 “SUPERFUTURES is a reaction to a moment in history. A moment in which the future and diversity of our planet is pulled into question. As socio-political shifts attempt to increase hierarchies and homogeneity, the exhibition suggests a future that is a hybrid – a rhizomatic queerness and a desiring machine.” – says Agnes Gryczkowska, Guest Curator

“The SUPERFUTURES exhibition will present past and future universes, full of mutation and cohabitation, blurring boundaries between the organic and crafted, between human and machine, and challenging existing outlooks and normative gestures into reshaping our future.” – says Mumi Haiati, Founder of Reference Studios and Reference Festival.

“Through the SUPERFUTURES Exhibition, Selfridges continues on its journey of  “reinventing retail“, this time in a more philosophical sense.  We aim to challenge our own mindsets, along with those of our customers, thinking deeply about what sort of future we might want, and the steps we need to take today, in order to live in a brighter tomorrow. We are thrilled to be on this journey with Reference Festival and an incredible line-up of future-thinking collaborators.“  –  says Emma Kidd, Selfridges Acting Creative Director.

Conceived by the communications agency Reference Studios, alongside founder and director Mumi Haiati, Reference Festival started out in an abandoned parking lot in Berlin’s Neukölln district in 2019. In its four editions, the Festival has boasted interdisciplinary contributions by some of the most relevant brands and artists in the world, emerging and established alike.

Throughout 2022, the creative theme SUPERFUTURES will explore tomorrow in the making, inviting visitors to Selfridges to co-create the future through a year-long discovery period. If the future is a work in progress, then SUPERFUTURES will celebrate this journey – a process of evolution and reinvention – across 2022, with super-charged topics informing the year’s calendar of curation, experiments and experiences.

Selfridges is a creative playground, a place for customers and collaborators to try on new lifestyles and ideas. Its non-conformist DNA enables Selfridges to test, learn, unlearn and reset; as the brand continues in its commitment to reinvent retail, changing the way we shop for a sustainable future.

About Selfridges & the Arts

Selfridges has had a long-standing commitment to supporting the arts since its first store opened in 1909 to the most creative window scheme London had ever seen – an homage to works by French painters Fragonard and Watteau. In the past 15 years alone, Selfridges has given its patronage to an ever-increasing number of initiatives focusing on emerging artists in particular; and supporting and engaging with the creative communities in the cities its stores call home in London, Birmingham and Manchester. Selfridges has on-going relationships with IKON, The Yorkshire Sculpture Park, Frieze, The Whitworth, Manchester International Festival and Bold Tendencies. It has commissioned site-specific work to or has exhibited work by artists as diverse as Yayoi Kusama, Fernando Botero, Tracey Emin, Marc Quinn, Sam Taylor Wood, Spencer Tunick, Banksy, Brian Eno, Conrad Shawcross, David LaChapelle and Joana Vasconcelos, Matthew Darbyshire, Yinka Ilori, Jonathan Scofield, Osman Yousefzada, Sharon Eyal among many others.