The iconic Selfridges building at Bullring is set for major renovation work which will begin in the Autumn of this year and is expected to be completed ahead of the Commonwealth Games in 2022.

The store will remain open throughout and trade as normal.

During the work, the building will be wrapped in a striking patterned hoarding created by Birmingham born fashion designer and artist Osman Yousefzada. This will be the designer’s first piece of public art, which he has entitled The Dogtooth Flower.

The renovation work is being carried out by Hammerson, who owns and manages Bullring & Grand Central and will see the 15,000 silver disks removed and stored, while the building’s facade is replaced alongside installing a new layer of insulation.

Once this has taken place, the building will be re-painted in the original eye-catching Yves Klein Blue before the disks are re-attached. The building, whose radical design was inspired by a 1960s Paco Rabanne chainmail dress, has become one of Birmingham’s most distinctive contemporary landmarks and a tourist attraction in its own right. It will retain its architectural might once the work is complete and the wrap and scaffolding are removed.

The building’s design was created by architects Future Systems and was ground-breaking. Since its original construction, there have been major advances both in construction and building standards as well as insulation. The renovation works and insulation upgrade will deliver a 50% improvement in U-Values (the rate of transfer of heat through a building), making the building more energy efficient to run whilst improving its carbon footprint. This is consistent with Hammerson’s Net Positive strategy.

Yousefzada’s new wrap commission for the building was carried out in collaboration with internationally acclaimed Birmingham contemporary art gallery, Ikon. The distinctive dog-tooth design is in part inspired by a hand-drawn print from Osman’s archive and is reminiscent of the perennial architectural qualities of the designer’s fashion collections.

Since launching his eponymous label in 2008, Birmingham born and raised Osman Yousefzada has forged a niche in luxury womenswear that garnered him numerous awards. Selfridges was the first department store to sell the designer’s collections.

The works will comply with the Considerate Contractors scheme and will see around 120 workers onsite during the upgrade. A team of architects, cladding specialists and structural engineers will deliver the complex programme of works and restore the building.

The Building contractor undertaking the works will strictly follow all of the Government’s guidelines with regards to Covid-19 throughout the project. During the construction period some footpaths, bus stops and coach parking will be suspended.

Conrad Bacon, Portfolio Director for Hammerson, said: “We are proud that the Bullring Selfridges building has gained icon status for its design and we want to ensure that it maintains its pride of place in both in Birmingham and the UK. The design and construction of the build means we have made the decision to undertake these upgrade works now to ensure the building’s long-term future whilst improving its environmental performance.”

Sam Watts, General Manager of Selfridges Birmingham, said: “We fully support the work Hammerson is about to undertake on our store to ensure its longevity and sustainability.

This work also gives us an opportunity to playfully transform the Birmingham skyline whilst championing the design talent of our city’s own Osman Yousefzada.”

Osman Yousefzada, designer, said: “I feel very lucky to have been selected from a shortlist of acclaimed international artists asked to design the scaffolding wrap. As an artist and designer, whose clothes have been stocked at Selfridges since my first ever collection, it is amazing to think that I will be dressing Selfridges itself. This will be my first piece of public art and to be able to do it on such a scale is truly exciting. I can’t wait to see it completed’.

Hammerson
Hammerson create vibrant, continually evolving spaces, in and around thriving European cities, with a focus on flagship retail destinations and Premium Outlets.  As of 30 June 2020, our portfolio of high-quality venues had a value of £7.7 billion and included 21 flagship destinations in thriving cities, and investments in premium outlet villages through our partnership with Value Retail and the VIA Outlets joint venture. Key retail venues include Bullring & Grand Central, Birmingham, Bicester Village, Oxfordshire, Dundrum Town Centre, Dublin, and Les Terrasses du Port, Marseille.

Osman Yousefzada
Since launching his eponymous label in 2008, Osman Yousefzada has forged a niche in luxury womenswear with an intellectual approach to design, exploring the cross pollination with other creative disciplines, garnering numerous awards. The designer and artist works at the intersection of art and fashion, combining his multi-disciplinary design practice with a strong sense of social commentary. His work is shaped by a personal consideration of the contemporary fashion world and the industry’s inherent inequalities, juxtaposed with representations associated with the experience of immigration.

Yousefzada pursued formal training and education at Central Saint Martins, London; the University of Cambridge; and SOAS, London. He held his solo exhibition Being Somewhere Else at Ikon, Birmingham (2018); and has collaborated on projects with Cecilia Bengolea and Haroon Mirza as part of Volcano Extravaganza -Total Anastrophes at Dhaka Art Summit, Dhaka/Stromboli (2018), as well as the group show Nightfall at Mendes Wood, Brussels (2019). He also participated in the Lahore Biennale A Rich Tapestry & A Believe is not a belief, because the truth is unbelievable (2020), Also at the Whitechapel Gallery London, he presented a film ‘Her dreams are bigger’ to co- incide with Radical Figures (2020), and has exhibited at the  Victoria & Albert  Museum, London; Design Museum, London, Cincinnati Art Museum and the Ringling Museum, Florida 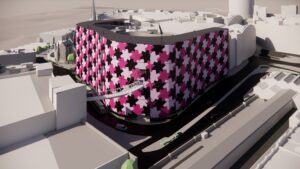 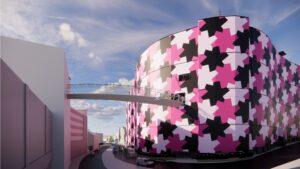 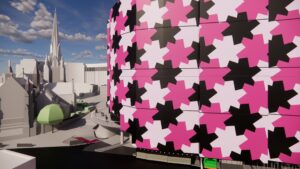